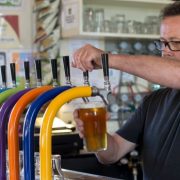 Local Co-organiser for SOBA in Nelson, Peter Mayes, told me it is a nationwide membership based organisation for people who enjoy beer, don’t drink vast amounts but also enjoy all of those community things offered by a local pub; “everyone knowing your name and having a yarn over a nice pint of flavourful craft beer.”

He says the other thing about local pubs with a focus on great hospitality and craft beers is that “you don’t tend to get fights in these establishments, people are there for social reasons as much as anything.”

At almost 80 years of age he has been drinking beer for about 60 years and he knows what he likes in both a beer and a pub.

“I go for the small breweries, I hate the conglomerates that put small businesses out of business, they are soulless monsters that just want to make as much money as possible for their shareholders. They are happy to spend large amounts of money on advertising and discounting, whereas craft brewers spend almost nothing on advertising, their product sells itself.

“Many years ago there were four or five breweries in Nelson that had what we would describe today as a craft beer focus but they were bought by the big breweries and shut down leaving the poor beer drinker with no choice.

“The two big two breweries produced the same beers for around fifty years, it didn’t matter where you lived North Island or South Island the beers were all the same but now we have some fantastic small and medium sized brewers making really tasty beer and we need to celebrate that.”

Mayes arrived in New Zealand in 2009 and lived in many parts of the country, house sitting while people were away for a period of time, he ended up in Nelson in about 2010 and never left.

He first visited Nelson 27 years ago, “I hitch hiked from Auckland to Dunedin for a folk festival and stopped in Nelson, which had a great feel to it, on the way back to Auckland; I loved New Zealand so much I ended up guiding tour groups from the UK to New Zealand for a number of years, just small groups of six or seven people with a similar interests in travel, music and other things, it was a lot of fun and I saw almost every part of New Zealand.”

Mayes spent the last 30 years of his working life teaching but before that he worked in the hospitality sector doing everything from “peeling spuds to consultancy and everything in between.”

He also owned an outdoor catering business for a few years based in Thruxton, Hampshire, it was a business that saw him catering everything from parties to weddings while the biggest event he catered was a buffet lunch for 500 at Windsor Barracks for the 1st and 2nd battalions of the Coldstream Guards when the Queen was presenting them with their new colours.

Right through his career in hospitality Mayes also had a love of proper English cask-conditioned beers, hand-pulled from casks in local pubs that did everything they could to ensure every beer they served was perfectly tasty.

Cask conditioned beers are beers that are still active in the cask (barrel) and are hand-pumped from the cask to the glass rather than being forced through by gas pressure, they are also naturally bubbly without the addition of a gas. Today some casks have a small amount of CO2 in them, simply to prevent foreign yeasts getting into the beer and turning it sour.

Mayes early days in the hospitality industry saw him working as a trainee cellarman “Within a few days I was ‘promoted’ and was handling 20 barrels a week in a small hotel in Alverston just outside Bristol, it may not seem like much but back in those days everything was done by hand, including getting the barrels up and down, from and to the cellar below the bar.”

I asked him two things, firstly what, in his opinion, makes a great beer and what he considers a great pub.

“A decent beer is the one that you are drinking that you like, I like a dark malty beer with plenty of hop flavour but am not that keen on pilsners and I like them to be about 4.5% alcohol, much stronger beers don’t appeal to me, in fact I will often have a blend of half pint of a lower alcohol beer with half of a stronger one.”

“For me having a beer isn’t just about the beer, it is an important part of my social life. I take my dog for a walk every day and we always stop in at a pub somewhere (on her insistence) to meet people as much as have a drink, when you live on your own sometimes it is the only time you see people to talk to, my dog listens but doesn’t reply however she is a great way to start a conversation.”

His social diary includes stops at a different pub each day, pubs that welcome dogs are important so you will often find him outside at McCashins, Squires, the Sprig & Ferns in Milton St or Beach Road, The Freehouse, Eddyline in Champion Rd Richmond, or even at the Golden Bear in Mapua – all places close to dog walking areas.

That brings us to my other question about what he thinks makes a good pub, “It goes back to the day’s in the UK when they tied the children up outside and took the dogs in, that changed and dogs were banned from being inside pubs but it has changed again and dogs are allowed back in pubs in the UK, (NZ parliament please note!) children being tied up isn’t such a bad thing.” he says with a chuckle.

He also likes a pub that doesn’t have a television, where background music is just that, people play darts, cards, dominoes for example and have a chat. It is all about being a great place to relax and enjoy a chat over a decent beer.

Celebrating great beer and outstanding hospitality is what SOBA is all about, members get together in different places and “chew the fat” and they have an annual awards programme for each region as well as national awards.

Regional awards are voted on via a membership login page on the SOBA website and only members of a particular region can vote, for example only Nelson members of SOBA can vote on the Nelson venue awards.

Members also get discounts usually about 10% in certain bars with each venue offering various concessions, if you have a pint a week in a pub that gives you a membership discount it more than covers your membership for the year, you just need to show your membership card in the right places around the country.”

Details about award winners and all things SOBA can be found at www.soba.org.nz

This years Nelson SOBA Awards were held at East Street Café last week and the 2017 winners were: 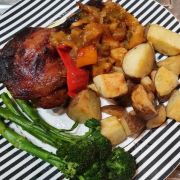 Roast Duck with Orange and Chilli 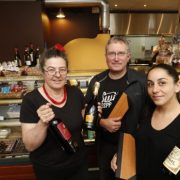 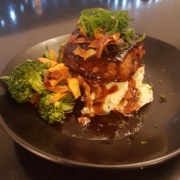 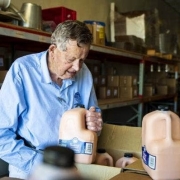